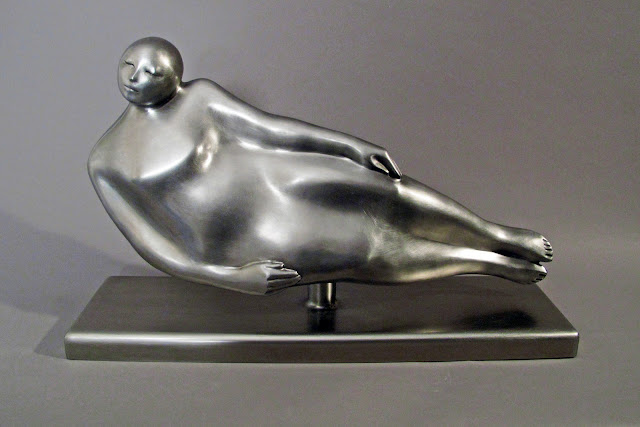 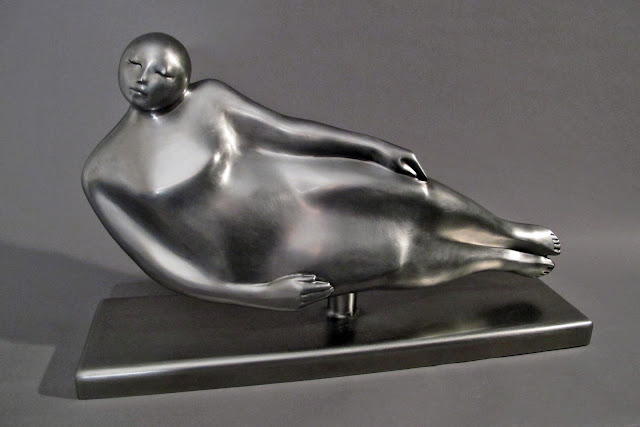 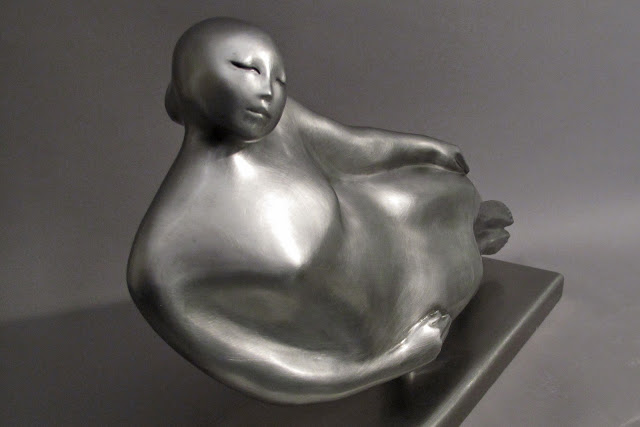 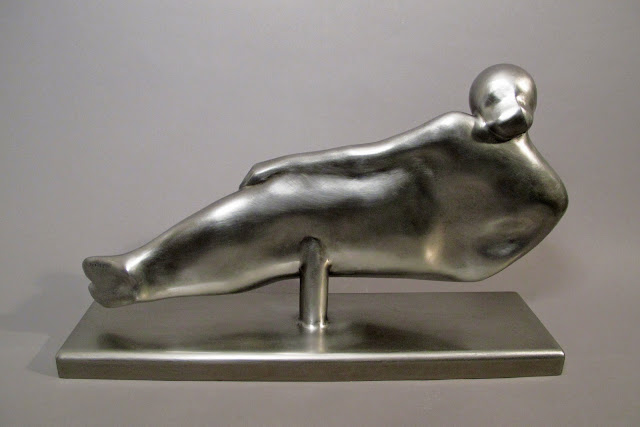 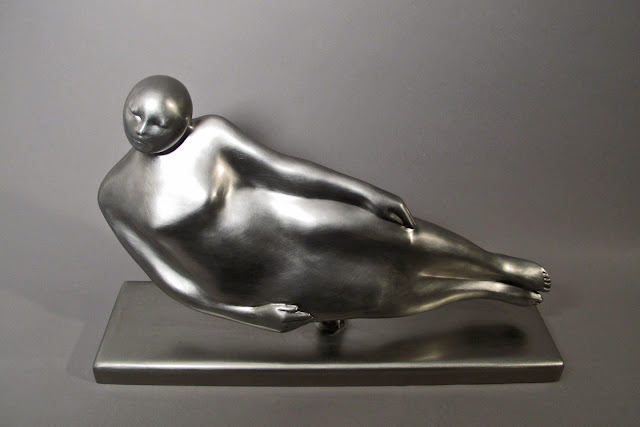 So I've been knitting lately. Here are my latest creations fueled by my passion for the knitting process. I'm by no means a technical whiz. Still I love the anticipation of the outcome, looking at and choosing the colors, and finally what happens to my brain when I do it. I go into the "knitting zone." Peace. Doing something without having to think too hard. For someone who's been told she thinks too much it's the perfect escape.

I also love the look of this design: the cowl. It's elegant and simple. You can be wearing a rather non-descript outfit, but once you put one of these on you are good to go! And keeping your neck warm keeps all of you warm.

So here they are! Contact me if you want to buy one. I'm selling each for $25. All of them are a simple tube shape, except for this green "mobius"wrap.

Email ThisBlogThis!Share to TwitterShare to FacebookShare to Pinterest
Labels: Knitting for Sale

Body-building not of the muscle kind

For years I have been building with body parts. Plastic and plaster casts of legs in particular make great building materials in my world. Pictured is an installation I put up at the Salt Lake Art Center from June to August this summer. It was a commissioned piece, in which the patron wanted leg "portraits" of his three ever-active children (yep I think I can do that).


Treating the flesh-and-blood body as object is complicated, but making body parts into objects is rather healing. Think milagros. Think about the transcendental nature of repetitive body movements such as walking. When we repeat something over and over, our thoughts have room to grow.


Years ago, while making plaster casts of a female figure of mine, I ended up with some broken appendages left over: legs, arms, and heads. I found I was more interested in these fragments than the whole unbroken sculpture. I began casting multiples of these legs and appendages as a meditation on bringing life to broken things.


I am not by nature a patient person. The hypnotic nature of filling and refilling my molds has turned into both a personal and rhetorical pilgrimage towards patience and progress. One of our greatest sins is in taking the body for granted. Becoming mindful of our life-filled bodies is a process I embark on every time I work on these legs.

Days and months later I find myself with an army of legs with which I can fill a room. I am exultant until the exhibition is over. And I start all over again…

Email ThisBlogThis!Share to TwitterShare to FacebookShare to Pinterest
Labels: Legs

A look at my gear as Ascension sculpture returns from foundry

I've thrown away my old work shirt. This beauty got me through some long winters in Wallsburg. I of course used it while working in the cold garage there finishing some of my bronze sculptures. It's been burned and caught in the grinder a few times. Here it is before it goes in the dust bin. Also a picture of its original owner before he shrunk it and passed it on to me. This is of course my husband Sam. 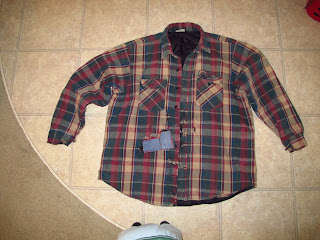 The cause for this gear purge is the arrival of "Ascension" aka "Moon Lady" from the foundry. I'll be working out in the cold garage, so I need to gear up! This is what stainless steel looks in the rough. Kind of dingy, eh? You can see some spots on the abdomen and neck where the shininess is showing a little. But it's going to take a lot more of that kind of grinding to get it to shine!
My client chose the name "Ascension," which is more noble than my nickname of Moon Lady. He wanted to have the title reveal that this figure is not just about the dream state and sleeping. She is a figure rising.
This project is giving me the chance to learn to weld stainless. Here's my trusty Miller TIG welder which allows me to do so. It also doubles as a shelf for some of my Armor Dresses. I am SO GRATEFUL for tools (and warm shirts) that give me the power to do what I want to do. Tools of any kind are liberating aren't they? 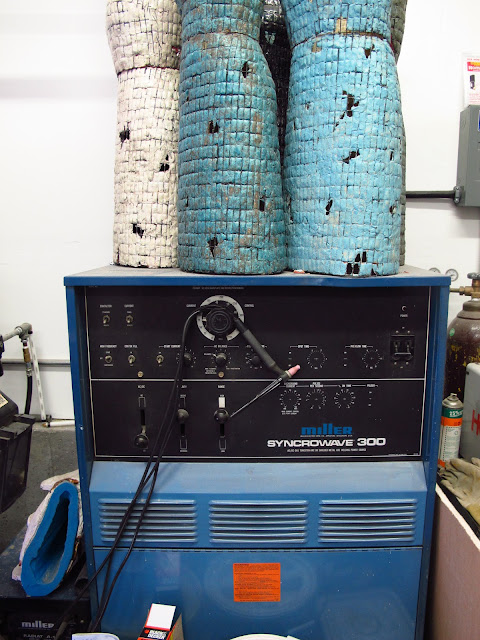 Here is the dress I've been working on for a couple months now. Eight firings in my kiln and many layers of glaze later and this is what I got. I'm really pleased!


Ever since I "made a mistake" with the glazes on Dress of Armor # 14 a couple years ago, I've been wanting to recreate it. Why a mistake? Because when I opened the kiln after layering new glaze on top of an ugly white glaze, I cried. I was sad that it still looked splotchy and the white under-layer had created a streaky effect with the green/silvery layer on top. Turns out to be the best mistake I ever made. The mottled surface drew oohs and aaahs from viewers. Here it is, one of the dresses sold to the Salt Lake County Art Collection this summer:
The problem has been to recreate this magical accident, a common difficulty in the hoodoo world of ceramics. Gladly I kept records of the glazes I used, but when I fired them on a new dress (the unfortunate Dress #24), I got some frustrating results. Glazes cratered and blistered in some parts, were smooth in others, etc. Here are some details of my efforts:
I LOVED what was going on with the glazes in separate parts of the dress, but they ultimately didn't blend well together.  She was fired over 10 times and I finally had to count her as a loss, albeit a very educating one.
So I'm happy that #28 turned out rather well. It is brighter in color than #14. The shape of the dress is better I think. What amazes me still though is that I was able to conjure #14's glaze effects in a mere two firings. Number 28 took eight. Better, more complex glaze perhaps? I think so!
Posted by Jen Harmon Allen at 3:28 PM No comments:

This moon woman is just about ready for take-off. I'll start the mold very soon. I am completing this piece for a client who wants it cast in stainless steel. I've never done stainless before and I am stoked!

You can watch a cool time-lapse video of the complete modeling process on YouTube. I feel overly fastidious when I watch it, so be prepared! 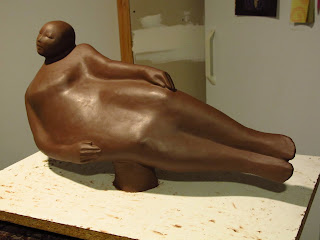 My clients Reg and Wendy wanted to go for a Henry Moore-inspired piece with voluminous forms and some abstraction. I am enjoying this as it is stretching me toward full and heavy shapes, whereas I normally do lean and tall in my figures.


Here is the picture of a Henry Moore figure they like, hoping it could influence the design for this commission. 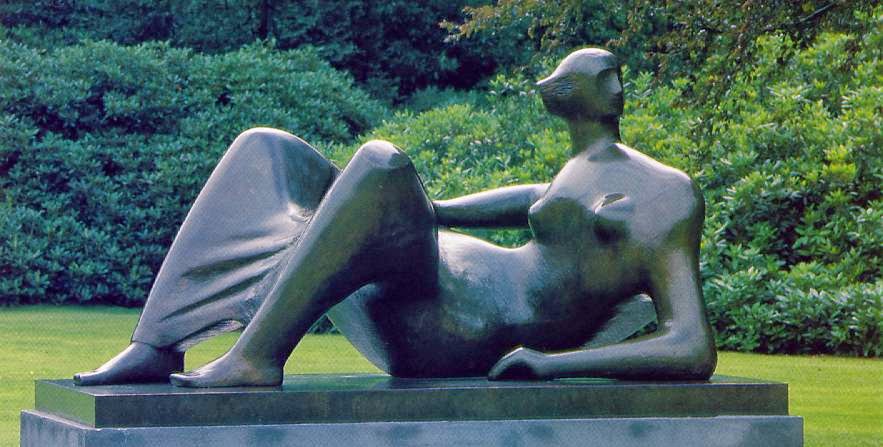 Then they came to my studio and we worked together on a small maquette for their own reclining lady. As I sculpted away, Reg and Wendy kept guiding me more towards a dream-state figure. This is what we came up with and you can see why I am calling her "Moon Lady." 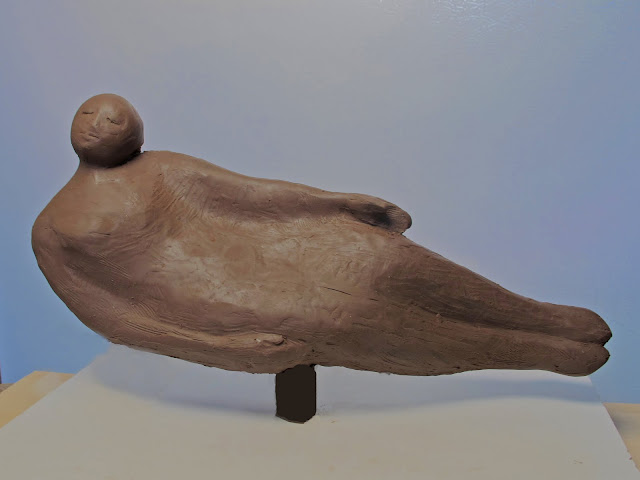 Interestingly, as Reg and Wendy were deciding whether to have her cast in stainless or not, I came across this image of a stainless steel woman at the Heard Museum in Phoenix. I guess the idea of a dreaming floating lady is not new! 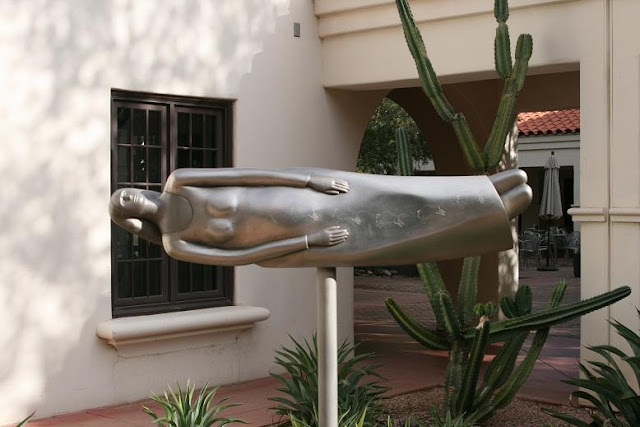 So here are some images of the enlarged clay model which I just completed tonight. She is 22 inches wide and about 9 inches tall and will repose on the mantel of my client's home. 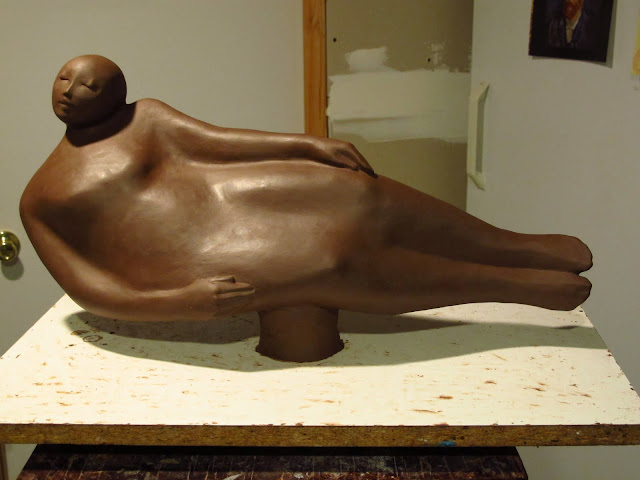 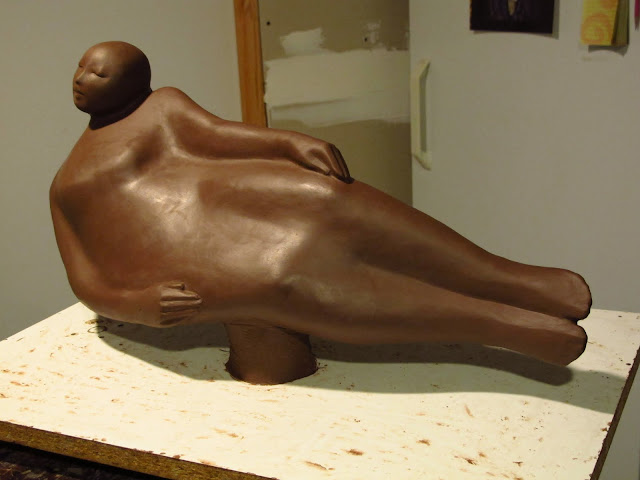 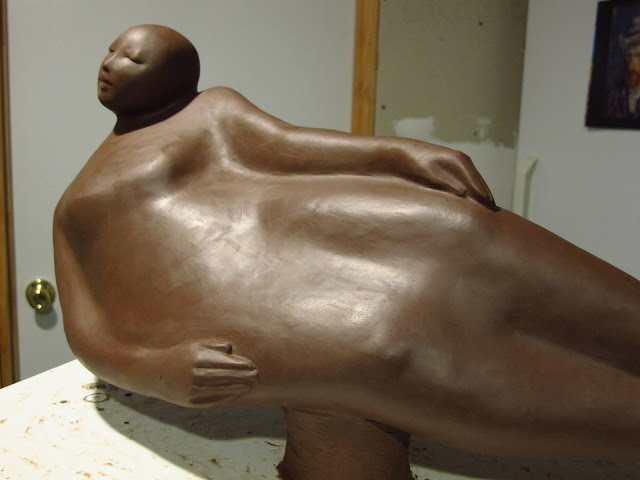 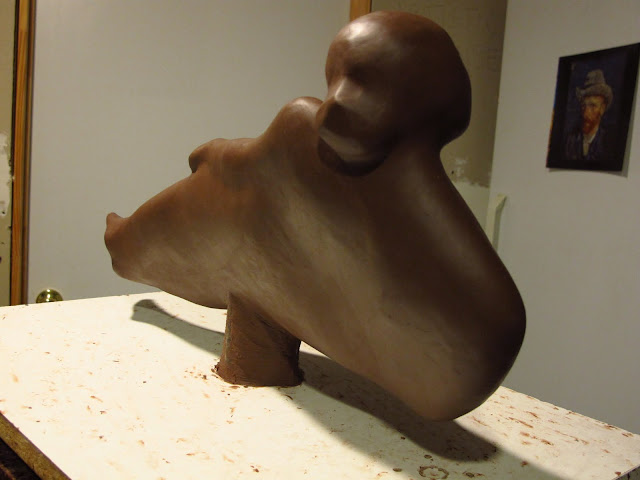 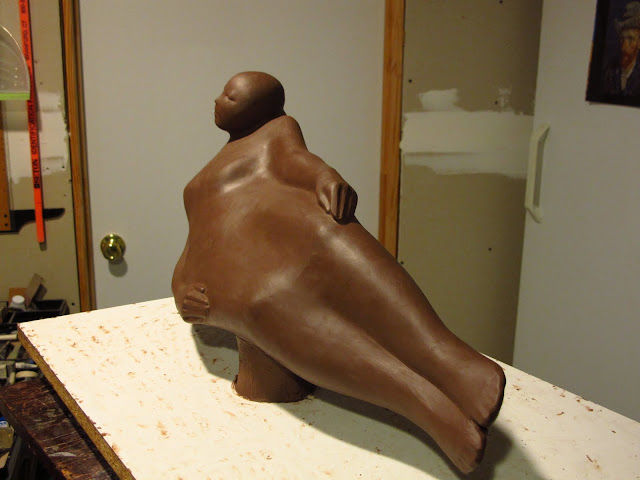 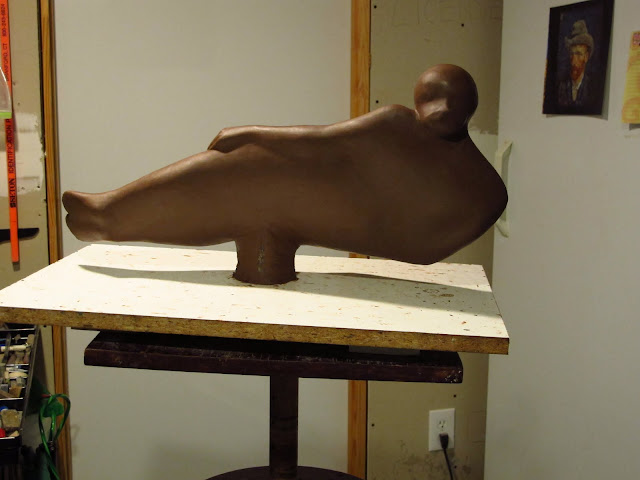 Photo journey into the studios of Utah artists

My sister called me a few months ago and told me she was ready to fill her newly remodeled home with art. "Would you go with me to see some art and hook me up with the artists?" She certainly didn't need to twist my arm, especially since I am continually finding intellectually stimulating and visually mouthwatering art here in my current home state of Utah. My sis lives in New York and has great taste, meticulous in fact. So the following images and words are from the many studio visits I made with her while following her nose with a little guidance from me. These visits ended up being a fabulous cross-section of contemporary Utah artists.


One undercurrent I found running throughout the work habits and visual styles of these artists is the commitment to obsessive process, whether it be meticulous mark-making or meditative pattern repetition and beyond. It seems many of the artists we visited engaged in some form of what Roland Thompson and I discussed as a Zen-like need for being in a state of non-desire. Funny since I feel artists, myself included, are slaves to our desires. But we also have a gift for craft, design, art: all things that seem to represent our desire to capture beauty in some form and hopefully stimulate that same desire in the viewer.


Could it be that beyond these visceral desires for joy and fulfillment we also wish to make without the pressure for perfection breathing down our necks? Does meticulous workmanship hone our spirits to this almost mindless yet blissful state?


I find that as I fill and re-fill my leg molds with plaster or plastic, adding yet another tally mark to the paper I keep on my wall, I am engaging in a meditative and healing process. I often feel guilty about it since I am still under the influence of classical thinking which tells us the power is in the singular masterpiece, a Mona Lisa so to speak.


So I'm wondering if many of us artists are negating that by embracing process over product. The quality of the work I'm seeing tells me we aren't losing anything by doing so. Amen to obsession I say! 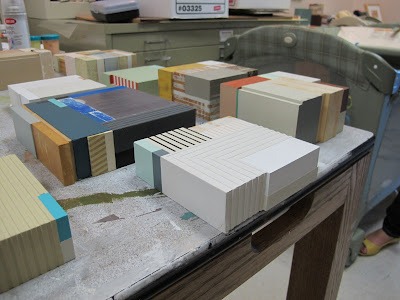 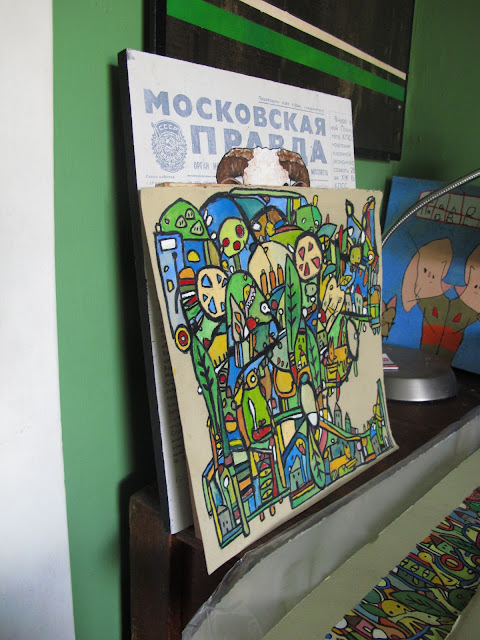 An untitled work of David Ruhlman's, which inspired a series of paintings on paper